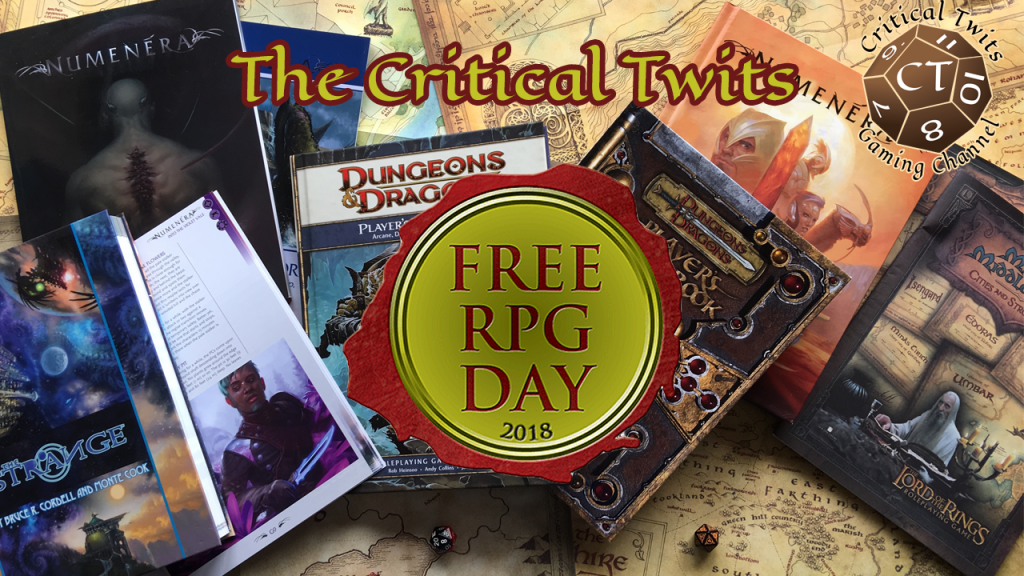 Every year on the third Saturday of June it is Free RPG Day. Established in 2007, the goal of the day is to get more people out to their Friendly Local Gaming Store and get involved with Role-playing. Unfortunately for some of us getting out to these events is not always the easiest. The closest retailer to Twits HQ here in the UK that is actually participating in the day this year is about 60 miles away (which doesn’t really put the L in FLGS).

Fortunately some RPG publishers are also giving away samples, quick-start adventures and other goodies free online over the weekend, so we decided to put together a round up of all the best releases we can find! We will continue to update this article over the weekend, so check back to see what new free games we have discovered and if you know of one we haven’t mentioned here leave a comment below and let us know! 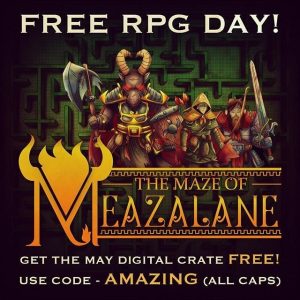 @DungeonCrate is a Loot Crate style subscription service for getting monthly deliveries of Role-playing books, adventures, maps and other paraphernalia. They also have a Digital Crate each month and they have made the May crate free for #FreeRPGDay18. In this release you’ll find the adventure the Maze of Meazalane, “an adventure for 4 to 5 characters of 6th level where you are tasked with rescuing a princess from a Minotaur.

To get the adventure head to https://www.dungeoncrate.com/may-2018/ and enter the code AMAZING 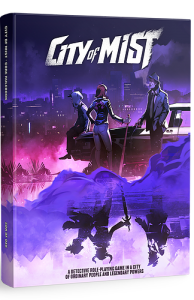 City of Mist is a “street-level detective tabletop role-playing game about ordinary people with legendary powers” from Son Of Oak Games Studio. For #FreeRPGDay18 they have made available the City of Mist RPG Starter Set along with lots of printable game elements and two adventures! All you need to do to get the PDF is subscribe to their mailing list. 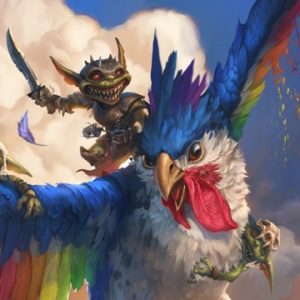 @WanderingMonsta on Twitter got in touch to let us know that Paizo will be releasing digital versions of the two adventures they distributed to stores on July 1st! The first of the two adventures is the Pathfinder module We Be 5uper Goblins!, an adventure for 6th-level goblin characters and the 5th in a series of #FreeRPGDay modules they have released.

Parts one, two, three and four are also still available. 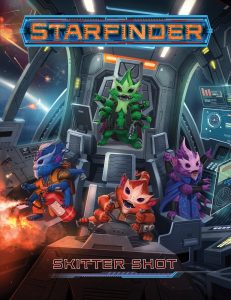 Paizo also have a similar offering for their Starfinder Role-playing game, with the module Skitter Shot also being treated to a free digital release on July 1st.

@TheCommandTent gave us a heads-up to check out the #FreeRPGDay offering from Absolute Tabletop, an indie RPG publisher, who have released The Battle For Rotspire, an encounter featuring twin duelling wizards! which looks like a lot of fun. 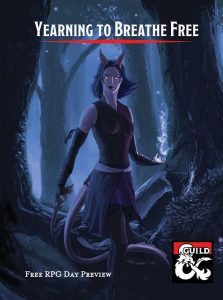 Yearning to Breathe Free is a Dungeons and Dragons campaign about the tieflings of the Sword Coast, designed for characters of levels 5-15 by @TravisLegge. The #FreeRPGDay edition is now available to download from DMsGuild! 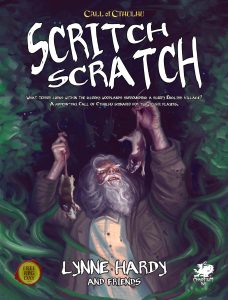 Chaosium, publisher of the Call of Cthulhu role-playing game distributed to stores the one-shot adventure, Scritch Scratch. What terror lurks within the gloomy woodlands surrounding a gloomy English village? A modern day Call of Cthulhu scenario for 2 to 6 players. Similar to Paizo, Chaosium will be releasing this adventure free online after July 1st! We will update this article with links once it launches. 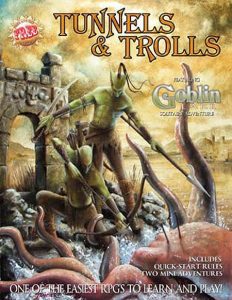 Flying Buffalo released a free print version of their Tunnels & Trolls Adventures translated from the original Japanese. Tunnels & Trolls is a simple role playing game where  all you need is some paper & a pencil. A free version of the rules in digital format with a solitaire adventure to get you started is still available on DriveThruRPG: http://www.drivethrurpg.com/product/54407/Tunnels–Trolls-Free-Rulebook 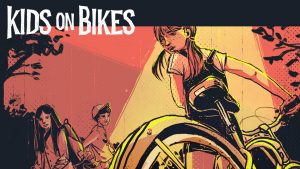 Renegade Game Studios successfully Kickstarted Kids on Bikes at the end of last year a Role Playing Game of “Strange Adventures in Small Towns” (Think of Stranger Things and you have a good idea of what this is about). A print version of the “Ashcan” Rules was released with a module to get you started. A digital download of the “Ashcan” Rules is available here:
https://www.renegadegamestudios.com/downloads/ 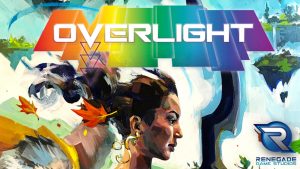 Renegade Game Studios also released a preview version of their recently Kickstarted RPG, Overlight, a “fantasy roleplaying game of kaleidoscopic journeys: a visceral, dangerous, and brightly-colored setting.” You can find a downloadable version of the preview rules here:
https://www.renegadegamestudios.com/downloads/ 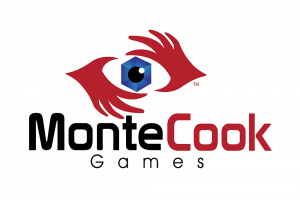 Last year Monte Cook Games gave away the Spire of The Hunting Sound quick-start adventure for Numenera and a set of extras to get you started. This year there will be another Numenera adventure which should be available here at some point in July. Regular listeners to the show might know that CriticalJamie is a massive nerd for Numenera so he is properly excited for more new content. 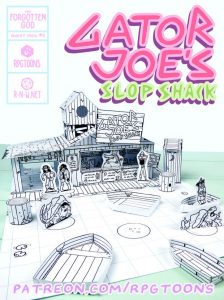 r-n-w is a UK based designer and producer of RPGToons, awesome cartoon styled print-and-play terrain, standees, quest items, maps, character sheets and more that are all available through their Patreon.  For #FreeRPGDay Rose from r-n-w has put together a good overview of the free items that they currently have available for download: https://r-n-w.tumblr.com/post/174958494685/today-is-free-rpg-day-weve-got-all-sorts-of 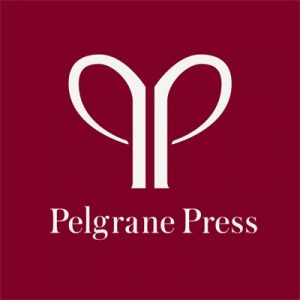 Last year Pelgrane press made two adventures available for free. Swords Against Owlbears for the 13th Age Role-playing Game and Font of Knowledge, an adventure for the time-travelling GUMSHOE RPG, TimeWatch.

This year Pelgrane are releasing another two adventures for free, but this time you need to already own the core rule books for Cthulhu Confidential and The Fall of Delta Green. If you already have either of these games the free adventures will be automatically added to your digital bookshelves this weekend. 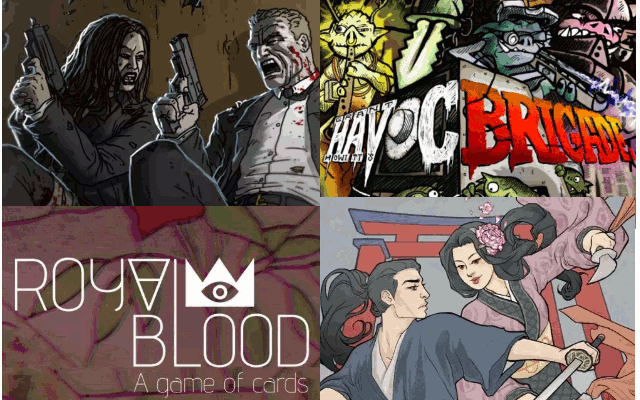 Edit: This deal has now ended, but check out the games anyway because they are great!

Rowan, Rook and Decard, the publisher of Goblin Quest and Spire have made four of their RPGs free for the weekend! This includes the wonderful Warrior-Poet, a one-shot RPG with Haiku based battles, One Last Job, a heist game where you develop the other player characters backstories via flashbacks, Havoc Brigade, where you play as a “bunch of tremendously loud orcs on an infiltration mission” and finally Royal Blood, another heist game but this time with magic and played with a Tarot Deck and a handful of coins!

For more information on all four of the games mentioned take a look below:

We’ve also been made aware of The Return of the Blue Baron, a free collaborative dungeon adventure for 4-6 players, levels 3 and up.

76 pages, 2 levels, 47 encounters, lots of new creatures, artifacts and magic items, a simple to use set of competition rules, all on a back story of murderous family struggles and court intrigues. Find it at http://www.drivethrurpg.com/product/245450/Name-Not-Found?src=newest_free_titles

Know about another Free RPG Day online release that we haven’t mentioned here? Leave a comment below and we’ll update the article!

Leave us a voicemail and we might feature it on the show!